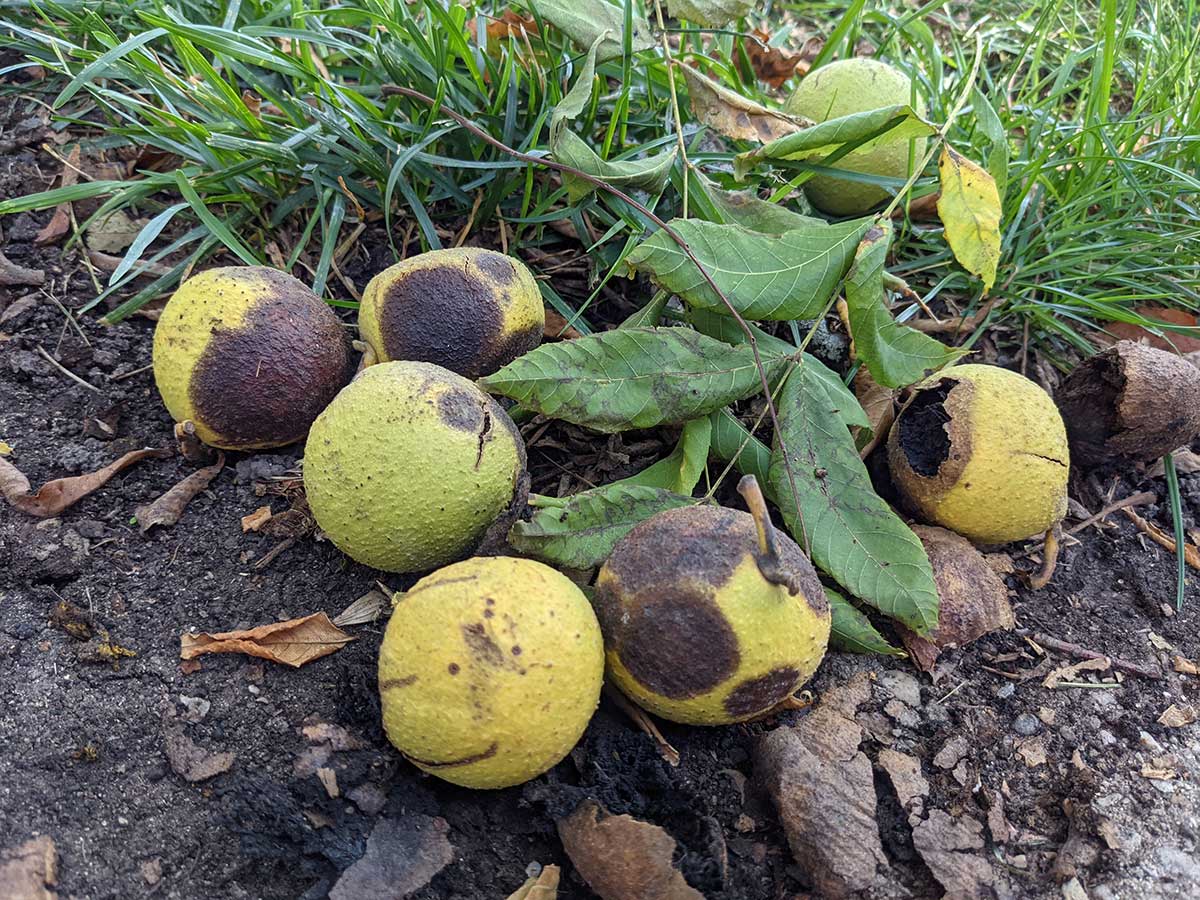 Juglans trees are large, majestic, and beautifully shaped. They are tolerant to soil type, pH, and growing conditions. The leaves have an interesting formation and are nicely colored. Nuts are edible. Sounds like a good tree but there is an issue to consider. All plants within the genus Juglans produce a nontoxic chemical called hydrojuglone. When exposed to air and/or soil, hydro juglone goes through a process of oxidation, with juglone being produced, a toxin to many plant materials. When a plant or plant process adversely affects another plant, it is referred to as an allelopathic response. In the case of juglone, the allelopathic reaction may range from the extreme of sudden death to a moderate and general prolonged malaise, to no visible response at all. Unfortunately, once a response begins and decline progresses, it is often too late to save the affected plant material. Sounds rather doom and gloom but it is just another piece in the puzzle when choosing and placing plant material. How serious of a problem is juglone? How long does it last? Are there a lot of plants that will play nicely with the Juglans?

Soil, organic material, drainage, age of trees, root depth, cultural practices, and compatibility all play important roles in the toxic severity of juglone. Different Juglans plants give off varying amounts of hydrojuglone. Different soils have varying amounts of air space and water within their profile that will affect the level of oxidation, resulting in varying amounts of juglone. Healthy soils with good levels of organic material and good drainage may not have intense juglone issues as the beneficial microorganism activity is greater. One of the few things that love to metabolize juglone is soil microorganisms. Young Juglans plants do not produce noticeable amounts of hydrojuglone until they reach the age of seven or eight years. Until that time, roots of susceptible plants would have to be suggestively touching Juglans roots underground for a toxic reaction to occur. As most tree roots extend roughly one and a half times the height of the plant, there are many opportunities for that below ground interaction. While most of the toxins do result from underground oxidation, leaf and nut debris exude hydrojuglone which can oxidize and produce juglone above ground. Juglone produced from above-ground debris will generally occur within the drip-line area, but may potentially extend up to 50 to 60 feet beyond.

The staying power of juglone is very dependent on the physical and cultural conditions outlined above. It may remain at very toxic levels in the soil anywhere from a few months to many years. Healthy soil microorganisms appear to be the magic keys to metabolic breakdown and the subsequent toxin neutralization. Improving the overall soil health and increasing the levels of organic matter in the soils surrounding Juglans plantings may help to minimize the toxic effects. If a plant is susceptible, the toxins will inhibit plant respiration, cause water and nutrient uptake blockages, and interrupt seed germination.

There are many plants that do play nice with Juglans. Most of the hardy, fall planted bulbs, such as alliums, crocus, daffodils, hyacinth, and tulips, are not bothered by juglone toxicity.

If you have questions specific to your property, or if you’re ready to discuss what The Garden Hoe can do for you, visit the contact page.